Immigration Nation – Why The Country Ban is a Terrible Idea 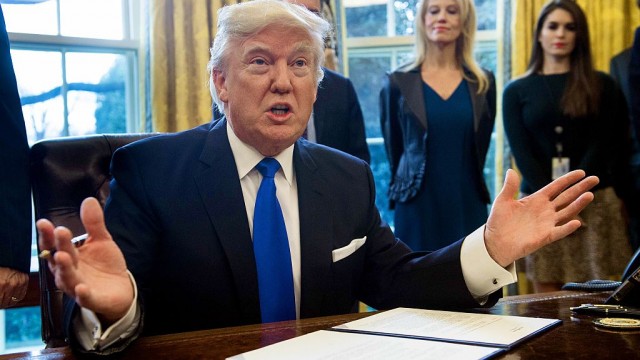 President Donald Trump took office in January and immediately went to work on all of the promises he made during his campaign. Of course, one of them being ‘deporting illegal immigrants,’ and ‘protecting the nation from terrorists.’ However, much of the nation didn’t take kindly to the list of countries he banned. Taking a closer look, of course, it’s easy to see why.

The issue with this is according to an up-to-date source of statistics on terrorists in the U.S, an overwhelming amount of terrorist attacks both successful and unsuccessful have been committed by either U.S born citizens or permanent residents.

Most of the fear mongering say that the main terrorist threat is outside of the U.S is entirely incorrect and a burden on the U.S’s values on immigration. But of course this could be said: “He’s just preventing another attack again!”

But here’s the issue with that.

Collectively, the U.S has had a total of 5 terrorist attacks carried out by foreigners or immigrants reported in the news that have taken place on U.S soil. One which wasn’t even from a middle eastern country, and another being a Muslim hate-crime. This list dis-includes 9/11. Compare this to the terrorist attacks that happen almost every year in countries like Syria. The U.S so worried about an impending attack from ISIS or the Taliban, it’s completely forgotten it’s been almost four years since our last attack on U.S soil. Trump’s emphasis on the 9/11 attacks is unreasonable because it’s almost entirely irrelevant to our situation. And while it’s necessary to defend the U.S, banning countries who aren’t even relevant to the situation isn’t a logical solution.

If terrorists are actually using any means necessary to enter the U.S, lengthening the already tedious visa system won’t help it. Terrorists have their ways and a terrorist can be anyone. It could be a guard, or a neighbor, or even someone close to you. Simply strengthening security won’t do anything but cause more issues for the U.S. It’s not that there’s nothing anyone can do, it’s just all these solutions being presented such as making a more tedious system that’s already done a great job protecting the U.S from potential harm won’t increase any chances of survival.

Iran, Iraq, Libya, Somalia, Sudan, Syria, and Yemen. These are the seven countries banned from the United States. There’s something that needs to be pointed out, though:

All of the countries banned from the U.S haven’t been the source of any of our terrorists. But the ones that aren’t banned also happen to be the ones who are the real criminals here. It’s also been pointed out previously by others that the same countries he didn’t exclude he has business relations in.

“But that has nothing to do with the argument! It’s just being used that to make him look bad!”

But here’s the problem: even without the fact that’s a really suspicious coincidence, it’s still terrible he made an obviously uneducated decision, with again, no attacks originating from the countries he banned.

‘Why is this even an issue? What’s the point of all of this?’

Because he’s taking away the freedom to come to America from people who aren’t even at fault for this whole mess, and in turn is decreasing the meanings behind American values and essentially what makes America America: Freedom from persecution, and immigration.

The executive order has no real purpose of even existing. While everything is legal (but poorly written), there still the issue in the fact this is denying people their natural right to come into the U.S. Because this nation was literally built on immigration and civil rights, by taking away a civil right from people who wish to come in, you’re setting a bad example for the U.S. So before you can say ‘it’s not a ban,’

He’s made it dangerously clear who he’s targeting. And while, yes, radical Islamism is something very scary and very real, there is no belief that is 100% pure. It must be considered all of the Christian extremist attacks done here. Times like these, everyone forgets the planned parenthood shootings or, again, the mosque bombing. But has the U.S forgotten that as a country, its very roots come from immigration? It’s not that the U.S should open the borders and let just anyone in, but it is an ill informed decision that should’ve went under more consideration of the consequences and the actual facts being presented. Even if you did want to ban countries, ban the ones actually responsible instead of ones painted under a stereotype.

Before it’s asked who would this even affect- just imagine 67,669 visitors and business employees who can’t enter to do the job they came to do and explore the U.S for what we have to offer. Not convinced? 14,135 students cannot enter the U.S to receive the education they so desire. Don’t forget 1,005 temporary workers. Who could forget 772 total fiancés who can’t see their loved ones? Not even the mention the thousands of refugees and immigrants.

Not even considering the fact there are U.S born citizens with first generation immigrant parents who are currently being deported simply due to a minor crime on the record such as several college students or even families. Or how about some just being deported because they’ve been deemed suspicious?

The immigration ban was an uneducated, knee-jerk decision that had no time or consideration. The reason congress and the cabinet exists is to filter and perfect decisions like these. It’s these kinds of immediate reactions that will eventually lead to the end of a formerly peaceful nation and the possibility of never being able to rebound from any of this. The nation currently has a leader that is obviously abusing the executive order and not being considerable at all. His actions are not of leadership-quality. At this point in time, it’s up to everyone to sit down and actually think and analyze everything, and for once not to take everything at face value.